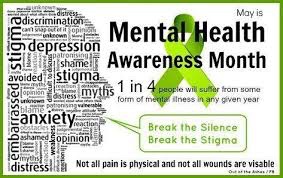 May is Mental Health Awareness Month. And although today is May 31, I specifically wanted to use the very last day to open up and talk about my own personal about with mental health, more specifically anxiety and depression. I was diagnosed with PTSD and severe anxiety last November. And as many people would guess it was partially military related. Yes, for those that don’t know me personally, I did serve in the US Air Force for a total of eight years. And within those eight years I saw a lot of shit. But in hindsight, I’ve realized that I’ve suffered from anxiety issues long before I joined the service. The military is what magnified my issues. My backstory is not too detailed, I’ve seen a dead child, I’ve had to bury fellow airman and friends, I went to war, pretty much the typical traumatic events most military members experience. So when I had my first real anxiety attack November of last year, it didn’t surprise me but it changed how I viewed the environment I had put myself in for many years prior.

A lot of people say they have trust issues. I am one of those people. Being in the military was almost like a baby living in a bassinet. I was sheltered. I was spoiled. And really, I did not know how to function like a civilian when I separated. I was totally lost in the sauce. Totally! But I had friends and family that supported me, loved me and would help me get through my transition. So I thought. When I left active duty, I entered a relationship and got pregnant almost immediately. This was the beginning of the worst parts of my life. I was with a man that I thought I would build a family with but when you make permanent personal decisions with someone you don’t truly know, it never turns out the way you planned. Within two years I was a single mother. The same type of single mother that I used to talk shit about because I could not understand how a woman could put herself in a position to become a single mother and not provide a solid, responsible father for her child. I became a statistic. But I was not going to allow my reality to affect my son’s innocence. I worked. I work my ass off. I went to school. Always maintained a high GPA. But despite all of the effort and hard work I put in to be the best mother I could, I still fell short and my son and I became homeless. On the outside looking in, you would think me being back in my hometown around friends and family, that would never be my life, but it was. It was our life. This was in 2012 /2013. I’ve struggled like hell ever since. I always kept a great job and made decent money but because of decisions I made in my past like putting things in my name for my ex, going into lease agreements with my ex, just trying to be the best girlfriend I could possibly be and support my man, I totally messed up my credit and my livelihood which is what ended up being the cause of my stress and depression. My decisions did that, not him. Throughout all that time I had someone I considered to be my very best friend. This was my sister, right or wrong, I supported her, defended her and loved her like we had the same blood running through our veins. We would always go to the club or be on the scene but that was about as far as it went. This was six years ago though, so my outlook on life and relationships was totally elementary. I thought I knew what a friend was. I thought I knew what family was. I ended up going between living with my mother to living in another homeless shelter then to living with my sister then to living with my aunt then to moving back to Saint Petersburg Florida all to start over again. In the midst of all of that moving around, I had another child. And guess what, I ended up homeless with my two children once again. All while working a position making $16 an hour. Never again will I under estimate how fast or slow a setback in life will come. Those trust issues I spoke of earlier, my family ruined that. Oh, and that so-called best friend too. I was SEVERELY betrayed despite all of the time, energy, support and money my broke, homeless ass invested into the people closest to me. But I didn’t realize any of that back then. it wasn’t until 2017 that I realized I have been living in a false reality with the people around me for years.

What pushed me to the edge? November 2016, exactly one year prior to my diagnosis, I was sitting on the bed in this raggedy ass motel/apartment room that I call “The Dungeon”, where my children and I had been staying for about a month or two. Working this decent paying job yet still having to scrape up money to pay for a roof over our heads every week, daycare fees, taking the bus to work, to pick my kids up, all things that one individual person could possibly struggle with, I was enduring alone. The true definition of being alone in the midst of others. As I sat on the bed this particular day, I was silently bawling my eyes out while my children played on the floor and watching television. I had a whole bottle of Advil that I threatened to take while telling the only person that would listen to me that my children deserve better than me and I didn’t want to live anymore. The stress And anxiety brought on a level of depression that I had never experienced. The person I was on the phone with saved me that day. It’s a hard task to comfort someone who is not only in hysterics but also threatening to take their life but he did it and to this day he is the absolute most important person in my life. Those friends and family that I thought I had, I couldn’t talk to them. As a matter of fact, right before my meltdown, I told my “friends” in our group chat that I wanted a break from the group and wanted to be to myself. Do you know what I got in return from them? I was told I was weird and that I was acting like I didn’t want to “fuck with them anymore”. In learning about depression and suicide prevention, that literally is the FIRST sign, withdrawal. I didn’t get a “Carmen, are you OK?”, “Carmen, what’s wrong?” I didn’t get any of that. Every last one of them turn their backs on me in the moment that I needed support the most. And to this day they don’t know that I wanted to commit suicide that same day. Even now talking about it makes me angry all over again because I take my relationships with people seriously and every single time anyone ever needed me for any reason I was always there. Always! How the fuck is the most down and out one of the group the one that did the most giving? I had never felt more alone and stabbed in the back in my life. But I digress, that man did not let me down. He cared about me and he cared about my kids and he put my anguish and pain before his own personal plans for that afternoon and talked me down for almost 2 hours. This is the same man that I whole hearted adore and am in love with to this day. He single-handedly has shown me over that time what real friendship feels like. HE was my true best friend! The months to follow were so defining in making me the person I am today. Needless to say, those girls are not in my life anymore, by any means. Not even the “best friend” of 10+ years. She’s wasn’t exempt. Today, my friends are limited. My family consist of my mother and my children. My whole life changed literally as soon as I separated myself from toxic relationships. My career drastically changed, my financial situation drastically changed, my life in general drastically changed! I opened my eyes and finally saw that the whole time I was struggling, I was around these people. They weren’t feeding positive energy into my existence. They weren’t pushing me to be a better me. They weren’t even having the “Girl you need to get it together” conversations that I so desperately needed. They weren’t doing anything for my spirit! But as soon as I removed myself from their “clique”, I blossomed. And it’s SO evident. Things changed once they were gone. This is why they say life is a learning experience within itself. It took me all of those years to see what was right in my face all because of love and loyalty.

I’ve lived many years not knowing I was suffering but once I took the time to re-evaluate myself and my life thus far, I realized how broken I was and I began my game plan to start living my best life. What I shared in this post is only a small portion of what I’ve gone through RECENTLY. This doesn’t even search the surface of what I went through in my early years, but that’s a whole other story to tell maybe one day. But with my kids, my man and genuine friends in my corner, my world couldn’t be a better place truthfully! There are so many people suffering in silence and we don’t take notice until it’s too late. That’s a regret I never want to experience so I ALWAYS make it my business to check on my loved ones periodically, whether they need the support or not because it means SO much to people to know someone cares. That alone can alleviate so much stress and isolation from people dealing with anxiety and/or depression. It’s easy to joke about being “crazy” or “weird” but that may be the reality and title that those people place on themselves…and who REALLY wants to be considered crazy or weird? But trust, my quirks have very little to do with me being a Gemini, I can assure you.

Hopefully, this tiny excerpt I’ve shared from my 30 years on Earth either inspires someone to tell their truth, seek the help they need or gives them the push to reach out to a friend in need. Everyone deserves a chance to tell their story.

I wanted to express this in correlation with my blog and it’s subject matter because we are seeing how sensitive of an issue mental health is in hip hop culture right now. Kanye has lost his damn mind, Bow Wow is crying out for help every other day. XXXTentacion, Logic, Kid Cudi, Lil Uzi Vert, Pharaoh Monch, Eminem, Lil Wayne, I could continue but I’m sure you get the point. And what’s worse for them is their struggles are broadcasted. Imagine that. Mental Health is a huge stigma in hip hop and real life. These artist’s stories probably make my whole life story look mild but no matter how big or small the issue, it should ALWAYS be addressed. Let’s pray the cycle breaks…very soon! ✌🏾 #Blessings